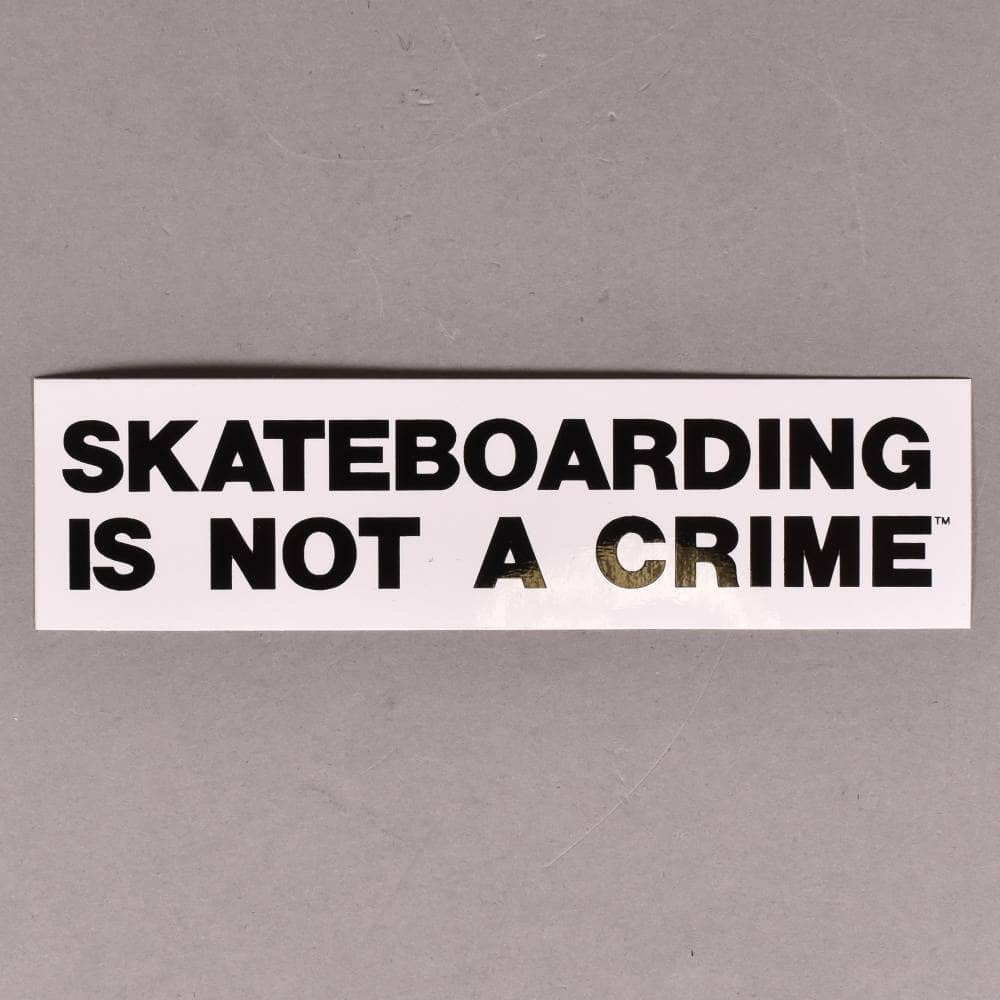 Santa cruz skateboarding is not a crime deck - are

Skateboard Collecting is not a crime Tee black

Apparel printed with stunning skateboard graphics or bold slogans have always been a part of the skateboard culture and its community. Our SCINAC (skateboard collecting is not a crime) apparel collection pays tribute to the over skateboard collectors worldwide who are the true archivist of this youth culture, preserving the history of skateboarding with their old painted woods known as skateboards. ? So why the name? Well, some years ago my girlfriend, rather sarcastically asked 'Don't you own enough skateboards yet? Which is a legit question, but also a difficult one for a collector to answer. So, I replied "I don't know, but skateboard collecting is not a crime." And SCINAC was born. ? The quote also pays homage to the infamous SKATEBOARDING IS NOT A CRIME bumper sticker that came as an add-on with a Thrasher skateboard magazine issue in the 80s and was later claimed by NHS aka Santa Cruz Skateboards. ? This apparel collection developed out of a simple sticker I designed and sent to fellow collectors who then asked for t-shirts. The first drop sold out fast, the skateboard collecting community was hungry for more. So now we launch a second drop, not only with t-shirts this time, but also sweaters, hoodies and zipped hoodies. ? All come as heavy Bio-Cotton garments with the screen-printed SCINAC logo and a sticker ? From every order &#; 1 will be donated to casinoextra.fr Skate & Youth Center. ? #skateboardcollectingisnotacrime

Vans’ pinnacle performance skate offering, Vans Pro Skate ArcAd, returns this holiday with a special limited-edition release of Pro Classics by iconic skateboarding label, Santa Cruz Skateboards. Designed in collaboration with revered Japanese artist and Vault by Vans designer Taka Hayashi, the Vans Pro Skate ArcAd Santa Cruz x TH collection celebrates decades of classic design heritage to honor some of the most renowned skateboarding mottos and motifs of all time including Santa Cruz’s bold slogan, “Skateboarding Is Not A Crime.” Santa Cruz Skateboards remains a pioneer of the industry, having created the most cherished deck graphics in skateboarding history since the early 80s.

Vans’ original Sidestripe and Santa Cruz graphics, including the famed “Skateboarding Is Not A Crime” slogan displayed on the foxing of each style, along with original skull artwork by TH

Constructed with the highest quality suedes and leathers; offered in Old Rose and Oatmeal tones with black foxing and waxed cotton laces

Inspired by skateboarding culture throughout his childhood, Hayashi remarks, “Santa Cruz’s endless archive of awesome skateboard graphics, logos, and fonts that defined the 80’s skateboarding scene left a huge impact on me as an artist and a skater. I really looked up to their style and artists like Jim Phillips, whose signature artwork continues to inspire me to this day.” This collection marks Taka Hayashi’s first-ever Vans Pro Skate project, following the release of his 18th season of Vault by Vans designs this past September.